Olshan’s Activist & Equity Investment Practice was again ranked by Activist Insight Monthly as “the most prolific law firm” in the shareholder activism space having advised on more than double the campaigns of the next closest competitor.  Activist Insight Monthly announced Olshan as the No. 1 ranked law firm in their annual Intermediary Awards as part of its December publication. The report goes on to note that “Once again, Olshan heads our law firm ranking with an impressive gap between it and the rest of the field.”  Additionally, Andrew Freedman, Co-Head of the practice, was quoted as summarizing the 2016 proxy season as reverting back to its “sweet spot in the small to mid-cap market space.” 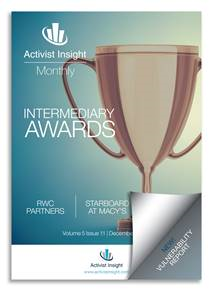