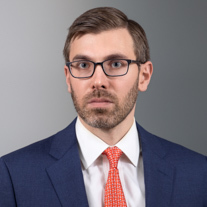 Ted is an accomplished litigator with a decade of experience representing both plaintiffs and defendants in complex commercial litigation. Ted has counseled a broad range of clients in sensitive matters, including financial institutions, fortune 500 companies, pension funds, government entities, and individuals. With a focus on securities litigation, Ted has experience prosecuting and defending an array of cases, including regulatory disputes, consumer class actions, construction litigation, trademark disputes, and contract actions.

Before joining Olshan, Ted was an attorney at one of the nation’s top plaintiffs’ firms, where he worked to obtain over $100 million in recoveries for investors in securities fraud litigation. Before that, Ted served for two years as a law clerk for the Honorable Joanna Seybert in the United States District Court for the Eastern District of New York. Ted began his career as a litigation associate at Winston & Strawn.

Ted earned his Juris Doctor from St. John’s University School of Law, where he was Senior Articles Editor of the St. John’s Law Review. Ted received his undergraduate degree from Cornell University’s School of Industrial and Labor Relations.